A lot of suffering in Nepal takes place in silence. In the remote mountain villages, health care is all but available. The health care providers who are there, are highly motivated but have hardly any education. The state of health care and education is deplorable. 70% of the women in Nepal have no access to the health care they need..
Starting in 2000, the Tamsarya Foundation has been organising education sessions in remote settlements in the mountains, in schools and in health care camps. In 2017, MIVA donated a mobile medical clinic, which enabled the Tamsarya Foundation to organise 40 camps per year. By using the MIVA pickup truck, 200 to 300 people per day can receive medical care. That means that the truck is visiting 60 villages per year!
Recently a ground breaking took place for a new maternity clinic annex health care centre in one of the mountain villages. Until now, the 25,000 people in the mountain villages in the area had to walk for at least seven hours in order to reach the far away valley for medical help. In the year 2016, 5,369 people received information and/or treatment. In the year 2017, 5,347 people received information and/or treatment.

It is still dark when we are assembling by the cars. People, as well as supplies for the medical camp, are being loaded, including Doctor Surya, a former Kumari-school student, six midwives, the driver, the project leader Deepak, the MIVA team, and of course treatment tables, chairs for waiting patients, and many boxes of medical supplies, equipment and medications. The mobile clinic is ready for departure! On the road to the village of Lapak, the view would have been breath taking, if it wasn’t for the dust keeping us from seeing more then a few meter ahead of us. We decide that the roads to the mountain villages in Nepal are easily the most dangerous roads in the world. After half a day of being tossed around in the rear seat of the 4WD, we are entering the village. People are greeting us from the clay huts that serve as homes for entire families. We drive carefully around people, dogs, chickens and goats.  In the village, a large group of people is lined up for their doctor’s visit.  But we first have to unpack and carry everything uphill to three empty huts, that we turn into treatment rooms for doctors and midwives, including a mobile pharmacy for the prescribed medications.
Doctor Surya and the midwives have a huge work load. 220 people have been waiting for hours for consultations. They came on foot from the surrounding mountains and we understand that the team doesn’t want to send anyone away without being seen. Besides a brief break for lunch, they are working non-stop, until every patient has been seen. Thanks to the MIVA Pick-up truck, these Tamsarya camps can reach 60 villages per year. The midwives, being trained in the Kumari Trust schools, screen the women for cervical cancer, often finding a prolapsed uterus, which in some cases means that the woman needs to be referred to a medical centre for surgery.
It is already dusk when we load all the equipment back up for our departure. When, very late in the evening, we sit down for our dal bhat, my Dutch travel companions and I are beat. Being on the road from early in the morning until 10 at night has its consequences. Our Nepali colleagues, however, are still carrying on in animated discussion, while we can only look at them in utter astonishment.

Medical camps in the mountain villages
Piet Jansen, family doctor  After having visited the Foundation Tamsarya projects before and financially supporting the construction of a blood bank, Piet visited Nepal in 2016. He worked in the villages of Bobok, Daumne, Namjakot, Kirtiput and Mohandadan, providing medical help to 677 people. In most villages he saw an average of 70 patients per day. In one of the villages, Bhadauri Jaubari, most patients suffered from eye infections and cataracts. In that village alone he saw 326 patients in three days, using up almost all of the eye ointment available. When asked for feed-back, we were told that, they hadn’t seen him taking any time, even for a toilet break. In Daumne, Piet was successful in treating more than a hundred orphans in the monastery, eradicating the prevalent scabies, including the accompanying bacterial infections. Piet gave a lot of knowledge for how to improve the system, both to the Kumari school and the health care centre. He also checked the health of all the children, while teaching them how to graphically represent a growth curve. After his first visit, Piet decided not to stop his activities, but to continue providing his knowledge and abilities to Nepal. He is ready for his next working visit.
Hans Smets, family doctor  Already for 10 years, Hans has been visiting the Tamsarya projects for medical assistance.He has also been working with the inhabitants of Haps on fundraising projects for the benefit of earth quake victims and on the construction of a maternity clinic in the hills.  In 2015, it took Hans eight days to provide medical assistance to 622 patients in several mountain villages. ”We left at seven a.m. Our porters were carrying medications and all equipment to the first mountain village. We also visited the beautifully located and authentically built village of Kirtipur, where I had been seven years ago. The earth quake damage was overwhelming. But life is going on. People in this village are working seven/twelve. The knit caps, bandages and other medical assistance were well received. The inhabitants are grateful and happy.” 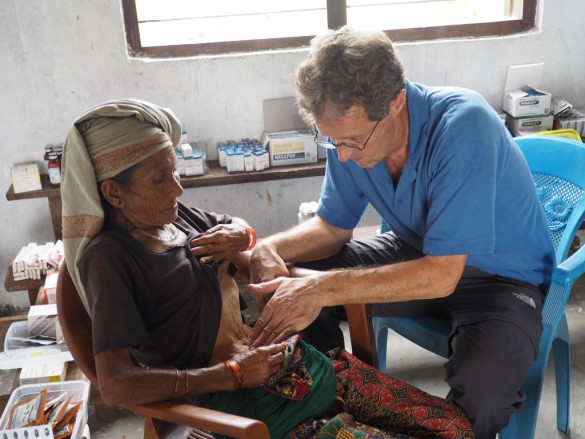