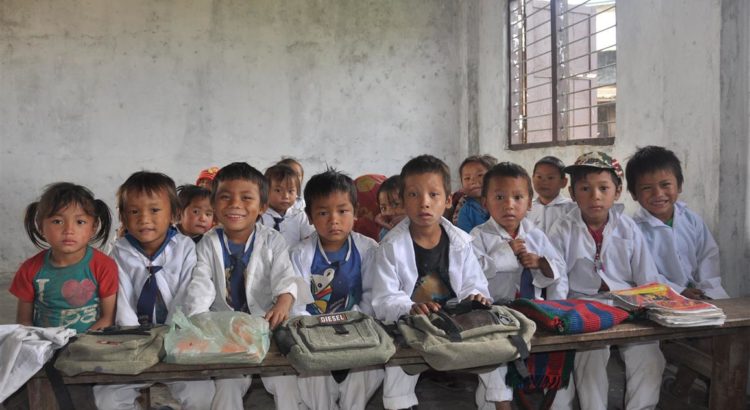 The Tamsarya Foundation started building schools in 1995, the first project being the “Kumari School” (annex orphanage), since then being responsible for the construction of as many as forty three schools. Seventy percent of these newly constructed schools are located in isolated area’s in the mountains, in some cases as far away from the nearest centre of civilisation as a three day walk. Before the schools were built, only forty to sixty percent of the children had access to education. These days all village kids go to school, some of them walking for two to six hours a day to get to school and back. As soon as the “real schools” appear, the authorities come into acion, taking care of two or three teachers’ salaries. The villagers themselves pay the salaries of the remaining staff, at a rate of € 15 to € 40 per teacher.

The larger centres of civilisation have a good education system, including a true proliferation of private schools. The rural area’s are lacking such educational facilities. The authorities there are not concerned with people living in remote villages. Living conditions and facilities In these villages are lamentable. “Schools” are constructed of mud, twigs and grass, while sanitairy facilities and water are mostly not available. The occasional, poorly supplied medical station is most often lacking personnel.

The Foundation did not only build elementary schools, it also built secondary schools and colleges, as well as a school for illiterate women and girls, a vocational school, and a midwifery school for poor girls.

These are the reasons that the Tamsarya Foundation builds schools for the survivors of these villages that are having minimal means of existence:

The Foundation has built schools for thousands of children, boys and girls, and illiterate women.