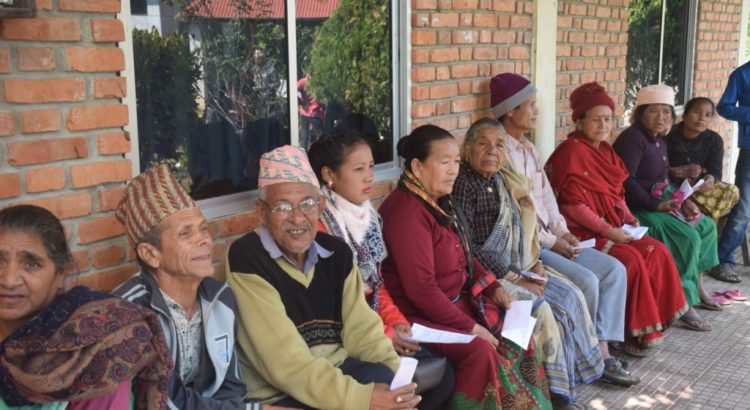 In 1973, Netra Joyoti Sangha (the National Society of Comprehensive Eye Care), and the Sewa Foundation Nepal, opened their first eye clicic as part of the Memorial Eye Hospital in Barathpur. In October 2005, the 35th eye clinic was opened. This clinic, being the first such clinic in the Nawal/Parasi District, was opened under the care of the Tamsarya Foundation. The small clinic is located in a former storefront in Kawasoti. While being small, it features an examining room and a store for eyewear and medications.

In 2006, the eye clinic’s visitor rate was 5000, while in 2009 this number increased to 9000. On average, the clinic was seeing about 25 clients a day. The 2015 earthquake did, however, so much damage to the clinic that it had to be closed down. This resulted in 2016 in the start of camps for eye examination and surgery.

In the second earth quake, several buildings sustained heavy damage. The number of cracks in the eye clinic was such that we had to clear it out and close it down. We are planning to build a new eye clinic in the future, on the hospital grounds, if we obtain the financial support we would be needing for such a project. The income from the eye clinic can then be used for the continuation of the eye camps, which have been disrupted as well. Right now we are in negotiation how we can continue this program.

The first camp took place in the beginning of February. During that camp the Centre welcomed 349 people with eye problems. In total, we were able to take care of 117 of them, one day after the screening, with eye surgery in the Barathpur Eye Hospital.

“Thanks to Kumari. It is god for us. I am out of vision for long time and now I received back my vision. I always wish for the best of the organization.”

“All the work, doing by Kumari is great. We highly appreciate it’s activities. It always thinks for the deprived community. This eye camp is also one of the highly appreciable program run by Kumari. I am one of the luckiest people to get benefit from this. I have low vision for many years because of cataract. But, no way for the solution. Today, I got back my vision. When I can get another opportunity for my next eye surgery?” I don’t have any word to express my happiness. Kumari is great who always think for the people like us who doesn’t have any access in the community.”