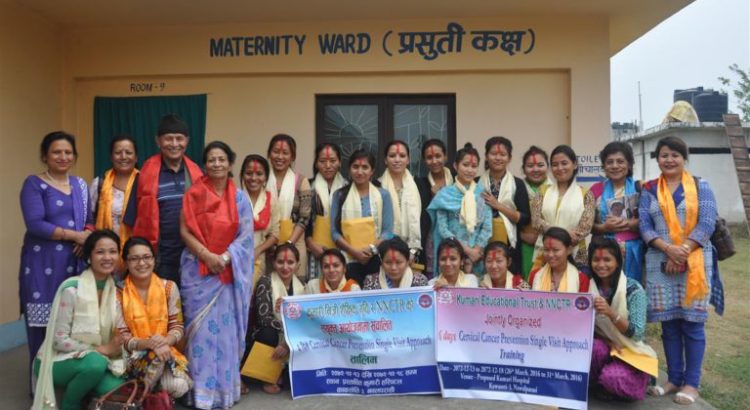 The number of women dying during childbirth in Nepal is higher than anywhere else in the world. Every year, between 5,000 and 6,000 mothers don’t survive the delivery of their babies.

In 2008 the Tamsarya Foundation started a midwifery education program for poor girls living everywhere in Nepal! In de past 9 years, 360 low-income girls from all over Nepal have been able to take the program, thanks to the Tamsarya Foundation’s financial aid. More than 80% of the students of the Midwifery Education Program obtained a diploma, while 65% of them are now part of the workforce. Most of them are actually working in the remote villages where they came from.

Tamsarya’s 18 months Midwifery Education Program has a very high standing in Nepal. In 2010 the school received an award for being the best in the country. In 2011, the school came second, while in 2016, the school again received the good news that its midwifery training program results were second best in the cuntry. At the moment, the Program has still 80 students from several remote areas, forty of them being in a classroom setting, while the other forty are taking practical training in a hospital or at one of the health care posts.

Nepal also has commercial Midwifery Education Programs, but these programs are for students with a background of family wealth. Upon graduation from a program like that, a student cannot be expected to be willing to locate in a remote village.

Starting in 2016, the graduates from the Tamsarya program can now also enroll in a training course for the detection and treatment of cervical cancer. At this time eighteen certified midwives received the NNTCR certificate, which enables them to screen women for cervical cancer, if necessary treat them, and to provide them with information.

Our pragram is presently having participants from sixteen different communities. It is serving as an example for all of Nepal!

Chhama Shrestha – I am 17 and I come from Arghaakhanchhi. That is one day traveling from here, if I want to go home. My father is a farmer with five years of elementary school. My mother is a houswife, never having been to school. She cannot read or write. I want to be very good at being a midwife. Of course I’ll go back to my village to help the poor there. I have been wanting to do this since I was a little kid. In my village, we have no health care facilities and not one midwife. In my village I met someone who knew about this school. That is how I had the good fortune of coming here. In Nepal, the circumstances for women are deplorable. There is no help during pregnancy and none if complications arise during delivery. Women are still being dominated over by men. Once I am back in my village I will not just be giving information to women and helping them during childbirth, but I will also be trying to improve the equality in my village.

Damanti Aslami – I am 20 and I live in a village in the hills called Bobok. In the winter, when the roads are open, I can go home by jeep. It takes three hours. In the rainy season, I’ll have to walk for seven hours. My father is a farmer. He took elementary school for one year. My mother is also farming, but she has never been to school. We are poor. We are growing ginger for a living. If I had not been admitted to this school and because my parents are too poor to pay for my further education, I would probably have become a housewife. Once I graduate from this program I want to be helping the low-income inhabitants of Bobok and the surrounding villages with their health care problems, and with the delivery of their babies. In the mountains, we don’t have any Health Care Facilities, resulting in women having a lot of complications having nowhere to go. There is a lack of knowledge and there is also no money. How can we get ahead in a situation like that? I am grateful to the donors for the chances that they are giving us.

Saraswoti Magar – I am 18 and I live in Makar, district Nawal Parasi. To get home from here takes a walk of an hour-and-a-half. My father died when I was three. My mother has never been to school. She owns two goats and a buffalo. Since we own no land, she has been producing rakshi, the local alcohol product. Since it didn’t look as if I could further my education, I was planning to move to an Arabic country, to become a maid. Fortunately, I was admitted to this school. That gave me a golden opportunity. Ever since I was a little child, I’ve always wanted to work in a Health Care setting. Once I’ll graduate from this program, I want to be helping women and other low-income people in my village. In Nepal, women are still treated as second class citizens. I am so glad that I was given this golden opportunity, to be becoming a midwife.